Another bright and sunny morning, and I noticed the puddles on the hotel's flat roof were frozen.  I strolled down to the station to find my High Speed Train waiting to take me to London.  (Once again, the irritation of having to stand on the platform until we were allowed to board.)  Soon the "Highland Chieftain" was rolling out of the station, bang on time. 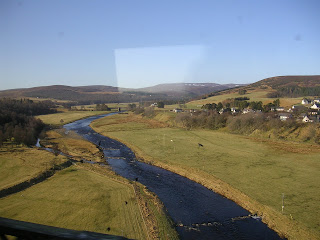 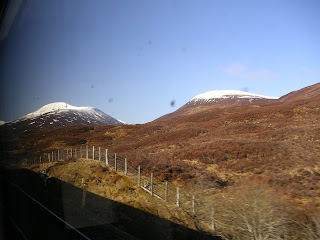 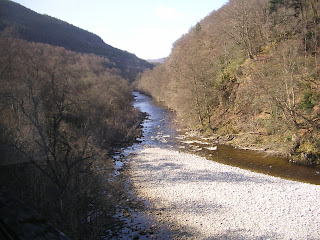 The train was pretty empty initially, gradually filling as we descended from the mountains and dawdled into Edinburgh Waverley, where all the train crew changed, but I stayed where I was.  Soon we were off again towards England, and it was time for another meal, a very nice fish pie washed down with some Old Speckled Hen.  At Newcastle the train suddenly filled, and I thought my chance for fame had come as I was joined at my table by a film crew making a programme for Sky about East Coast Railways, but unfortunately they were not filming on this train and they left at York for their next assignment with my anonymity intact.

A further brush with fame as the young man sitting across the aisle from me was suddenly posing for photographs with the train crew, and signing autographs.  No idea who it was, perhaps a footballer?

Eventually, after eight hours, we arrived at King's Cross.  The walk to the Victoria Line is now incredibly long - Remind me to use the Piccadilly next time! 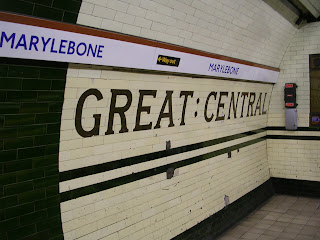 Soon I was at Great Central, I mean Marylebone where there was time for a swift pint of London Pride in the comfortable Victoria and Albert, before moving to my next objective. 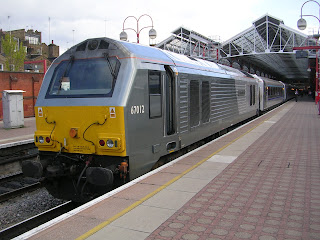 Chiltern Railways have some loco-and-coaches trains to provide more seats on their busy Birmingham services, so I was at Marylebone to have a ride on one, and 67012 "A Shropshire Lad" was ready and waiting.

Chiltern don't have first class, but they do have a "Business Zone" on these trains and I sat in a comfortable seat in the half a carriage allocated for this.  Free tea was on offer as I enjoyed the pleasant run up to Birmingham.  The coaches are British Rail Mark III, substantially refurbished, with power doors, and they've done a very nice job on them.

Once at Birmingham Moor Street I strolled over to New Street.  Good Grief!  What's happened?  The entrance is closed and I had to walk round the side to a new way in to a totally remodelled interior which was full of lost people, some of whom had probably been searching for their trains since the new layout came into operation on Monday!  Anyway, just time for swift pint of ... Drat, they've closed the pub!

My next ride was on one of Virgin's class 221 Voyagers.  The incoming working from Edinburgh was running late but a nifty reversal saw us under way only one minute down.  I enjoyed a ham and cheese toastie as I compared the comfort of this unit with the Adelante I rode in on Saturday.  The Voyager's engine noise seemed more obtrusive, but the ride was better.

Next leg, from Crewe to Liverpool, was in a very lightly loaded Pendolino, there were three of us in the first class quiet coach.  (Only Virgin could designate the pantograph coach as a Quiet Zone - The almighty bang at every neutral section is surely much more disturbing than a bit of mobile phone chatter.)

Finally, a 150 unit carried me from Liverpool to Huyton.  Home at last, albeit for only nine hours.