Yet another sunny day, and a sense of deja vu as I took the same first two trains as last Thursday, getting me a fried breakfast and a ride to London.  The recurring theme of unoccupied reserved seats in first class was again apparent.  From Euston I took the absolutely jam-packed Northern Line down to Waterloo. 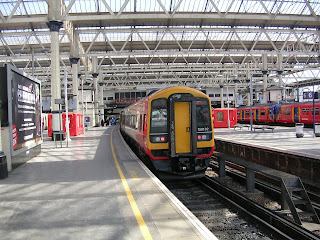 At Waterloo, there was plenty of time for a leisurely pint of Pride in The Beer House - Didn't this cellar bar used to be called something else?

Then, time to join my Southwestern Trains class 159 unit for the long run to Exeter.  It's many years since I did the West of England Main Line, as it's called, I think there was a Class 50 loco on the front last time, so it's well overdue for a revisit, and soon enough I was speeding along in the comfortable first class section of the 159 unit.  We left the attached class 158 unit at Salisbury.  The scenery along this line is hardly the Scottish Highlands but it's very pleasant, with mile after mile of rolling green fields under blue skies.

All too soon we'd reached Exeter St Davids, where I quickly jumped onto a Cross County Voyager (The number of which I forgot to record.) putting me fifteen minutes ahead of schedule.  Or so I thought - This one goes via Weston-super-Mare instead of whizzing up the main line, losing most of the time I'd gained.   (On the plus side, the Weston loop is some more track that I haven't done for probably thirty years, so perhaps it deserved a visit!)

Once at Bristol, there was time for a swift pint of Butcombe Bitter in the very impressive Bonapart's on platform 3 at Temple Meads before boarding an overcrowded 150 for an uncomfortable run to Cardiff.

Here I exited the station and headed to the nearest Wetherspoon's, the Great Western, for a pint of Brains SA and an update of the blog. 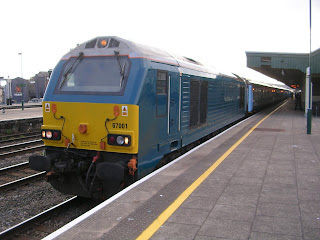 Soon, it was time to head back to the station for the final target of my plans, and it turned out to be something of a grand finale.  The Welsh Assembly Government have contracted Arriva Trains Wales to run this special service every day from Holyhead to Cardiff in the morning and back in the evening.  The train features a small first class section with a proper dining service included in the fare.  (The true purpose of this train is said to be to give WAG members from North Wales a comfortable way of getting to and from the assembly.  If this isn't the definition of "gravy train" I don't know what is!).  Anyway, the train consists of refurbished MkIII carriages and a class 67 loco, similar to the Chiltern set I rode on yesterday, but the catering is infinitely superior with a travelling chef cooking dinners to order. 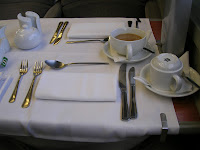 So I joined three other lucky passengers in the short first class section and settled down to a pleasant trundle through the Welsh Marches while eating an excellent three course meal.  Here's a shot of my table with the cup of tea before the meal started.  Sorry, I should have photo'd the actual food but I was too busy enjoying it and the scenery.  Near Leomster I noted a hot air balloon in Virgin livery, near the line.
This final, and best, bit of luxury of my week ended at Chester, by which time the train was seventeen minutes late.  I couldn't really see a reason for the lateness, we just seemed to leak minutes at each stage of the journey.

First class travel over, I took a Merseyrail 507 back to Liverpool where my arrival was far too late for the Huyton service which is stopping early Sunday to Thursday during the ongoing electrification works.  So, rather than sully my pass by using it on a rail replacement bus (Which takes 40 minutes to cover the 5 miles to Huyton.) I treated myself to a taxi home.