Yet another bright morning, with quite a significant frost in Cambridge.  A leisurely day's travel was planned, but with a hefty mileage.  My first unexpected sighting of the day was 33207 parked in the neck at King's Cross. 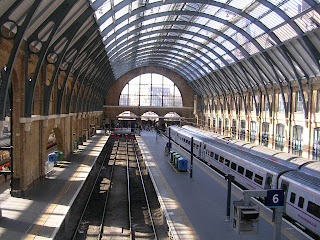 The terminus looked very impressive with the sun shining through the newly clean roof. 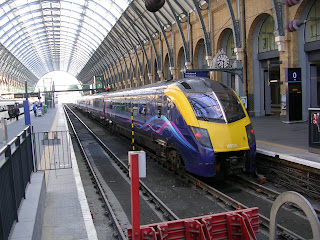 Another of the open access operators, Hull Trains, had one of their Adelantes present.


I boarded an East Coast HST to start my journey northwards.  A slight snag with the seat, I chose an unreserved one and then someone turned up with a reservation.  Usually this can be resolved by pointing out they're in the wrong carriage/on the wrong train/on the wrong date but not this time.  Fortunately there were vast numbers of reserved but unoccupied seats so she kindly sat elsewhere.

The HST soon whizzed me to York.  I could have stayed on to Edinburgh or even Aberdeen, but it was time for a proper drink - East Coast's free tea only goes so far.  Due to a quick start and a prompt taxi in Cambridge I was currently one hour ahead of plan, so at York I jumped off and headed to Coopers for a swift pint of Bombardier.  Bloody hell!  Four pounds twenty-five!!!

Time for some loco haulage of sorts, I caught a 91-hauled train to Newcastle. 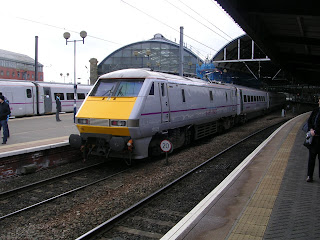 The train terminated at Newcastle, here's a picture, and there was just time for a swift pint (Do you see a theme developing?) in the wonderful Centurion Bar on the station, I had Tetley's Gold this time.  There were lots of photographers about so I guessed a special was due, but I caught the next Edinburgh train, another 91 hauled set.

Soon, just as I glanced down at my sandwiches, a train passed and I looked up to see maroon coaches passing, so I'd just missed the steam special which I gather from the web was hauled by 60009 Union of South Africa.  But wait a minute, as we passed through Morpeth the photographers were still holding up their cameras, and sure enough, we soon crossed a short train with 45407 and 44871, one on each end, on their way to Grosmont.  (Says uk.railway - I didn't have time to read the numbers)

This was the latest train of the week so far, but it had caught up some of the lost time by Edinburgh, so there was just time for a swift etc. etc. so I had that famous Scottish brew: Old Speckled Hen in the station bar.  Annoyingly, a year after I was last here, Waverley is still a building site. 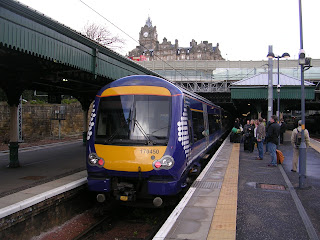 The final leg of today's journey was a bit of a come-down, and I had to slum it in a 170.  Still, the first class was OK and I managed to bag one of the only two forward facing window seats.
Plenty to look at on this stage, starting with progress on the long-delayed Edinburgh trams, and there's still a lot to do before they open.  We whizzed across the Forth Bridge, the weather by now being intermittent sunshine and heavy showers, and then up to Perth and on to the Highland Main Line.  The rugged scenery was made more atmospheric by the intermittent overcast and rain.  In the clearer moments I could see snow on the higher mountains. 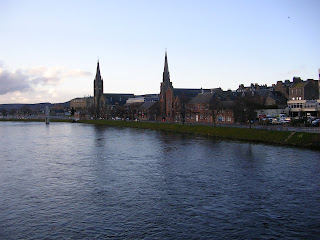 Eventually we descended into Inverness (A steep enough drop to make my ears pop.) and the end of my day's travel.  Needless to say, after snapping a couple of photos of the city, there was just time for a swift pint in Wetherspoon's as I updated this blog.