Another bright sunny morning, and I started with a 156 from Huyton to Manchester Victoria.  Lots of electrification progress to spot along the line, with quite a few miles of catenary complete after Newton-le-Willows.  (For more details, see my Northwest Sparks web site.)

At Victoria I applied the 'catch the first train' rule properly and hopped on a Bradford-bound 158, 27 minutes ahead of my planned departure.

The fine weather didn't last too long, and it was raining as we passed under the new Metrolink bridge at Rochdale.

This route across the Pennines is quite scenic in its own way and also features the pretty station at Hebden Bridge, where I noticed some ceramics on the booking office walls.  At Dryclough Junction I spotted the empty stock of my next train, waiting to follow us into Bradford - Good news as the service was cancelled yesterday. 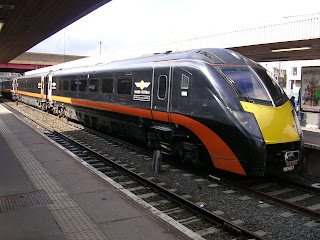 Why go to Bradford?  I wanted to try out the Grand Central service to London.  And I was pleased to see it would be another chance to sample a Class 180 Adelante.  Previously my only ride on these units was a stopping train from Preston to Manchester, which is hardly what they were designed for.  I was surprised to see half the seats in first were reserved, but I was the sole passenger in the carriage when we left Bradford.  By the way, one minor negative customer service point - The stock was ready, the refreshments had been loaded and the reservations put on seats, but passengers were kept waiting on the draughty platform while the crew chatted in the warm.  Once we got on, service in first class was friendly and frequent.

As it turned out, only about half of the first class reservations turned up, and I was the only passenger in the unreserved half of the coach throughout the run.

My goodness, they don't half use a roundabout route!  I know Yorkshire is quite large, but it shouldn't take two hours to get out of the counties!  I'm sure I spent plenty of money and effort back in the 1980s to do all these back routes.

The Adelante had a very bad wobble on pointwork and track defects, even at low speeds, but performed well on smoother track, even at 125mph.  The engine under my feet was not obtrusive, and produced impressive acceleration when necessary.

Plenty to look at on the journey as well, I was surprised to see two pairs of choppers in the yard north of Peterborough, one pair in Harry Needle livery, and also the worlds most overpowered train, three class 66s pulling one container flat!  The extra platform at Peterborough is progressing, we slowed right down on the up fast so I could take a look!

The flyover at Hitchen has masts but no wires yet, and further south, the extra platforms at Alexandra Palace (When I was young, it was called Wood Green.) and Finsbury Park are under construction. The FP platforms are on the site of the half-completed Northern Line platforms, I think - Perhaps they'll get them finished this time.

Once we reached King's Cross (It'll be nice when it's finished!) I jumped on the oldest underground railway in the world for a short ride to Liverpool Street.  I like the Metropolitan Railway diamond signs at Moorgate. 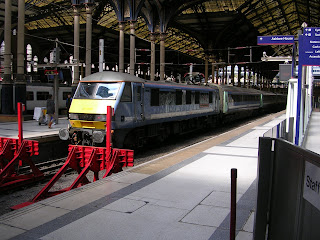 Just time for a very quick one in the spectacular Wetherspoon's before the next step on the journey, with loco haulage (Technically "propelled".) on the Greater Anglia line to Norwich, with 90012 doing the honours.

I spotted a C2C train for Fenchurch Street at Stratford - Engineering works or Saturday shopping service?  [Update: I am advised via uk.railway that the wires were down at West Ham, causing diversions.  Thanks, Peter.]

The final leg of today's trip was in a class 170 to Cambridge.  The first class pass came into its own here, as the train was quite crowded, except for the tiny first class compartment at the rear, where I settled into a comfortable corner seat.  A four minute late departure was pretty good, considering the incoming service wasn't even in sight when we were supposed to be leaving, and we were delayed a further few minutes by a faulty level crossing near Lakenheath.