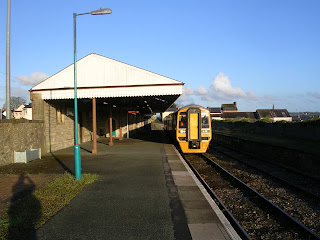 A bright but chilly Friday morning saw me at Pembroke Dock station in time for the 07.09, a class 158 to take me to Carmarthen.  I haven't been to West Wales since the early 80s so I decided to do all three of the branches here.  From Carmarthen a 150 took me to Fishguard Harbour, the train split at Whitland with a single car 153 going back to Pembroke.  Unlike the pretty rural scenery of the rest of this region, the harbour here is modern and industrial - and at the time of my brief visit, totally devoid of cars, lorries, and train passengers. 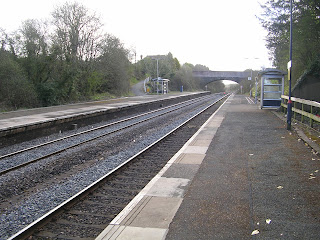 The sunshine and cold wind continued as I changed trains at possibly the most out of the way station I will use on this ticket, Clarbeston Road.  This is a request stop so I had to ask the guard to let me off here, and signal the driver of the next train to pick me up.  Scenic delights included kites wheeling over the fields, and a wooded valley on the approach to Milford Haven with a swan nesting on the river below. 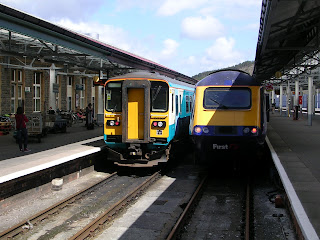 After Milford Haven I headed east, to Swansea.  Here there was a change of plan.  The provisional schedule had me heading for Cardiff from where I could catch the loco-hauled WAG Express to Chester on my way home.  However, in view of the wonderful weather I decided more scenery was called for, so instead I boarded a single car 153 for a long ride up the Central Wales Line to Shrewsbury.  Stunning scenery kept me entertained throughout this four hour journey, although the downside of this choice was that I missed out on the luxury of first class travel via Cardiff.

Following my long ride, a change at Shrewsbury saw me on a busy 175 headed for Holyhead, but I only stayed on until Chester. 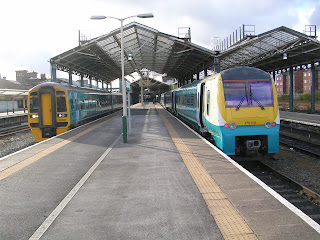 At Chester I broke one of the prime directives of bashing:  Always catch the first train.  There was a late running 158 which was 100% loaded which I could have caught to Earlestown.  I rejected this and instead took the lightly loaded 175 which was my planned train.

I got away with it, and as we approached Warrington I could see the stock for the Liverpool service waiting on the line up from Walton Old Junction.  For some reason the journey planner recommends the long walk at Earlestown instead of the same platform connection at Bank Quay for this journey.  Mind you, I've been sat on the Liverpool train before now and we pulled out just as the arrival from Chester pulled in, and then we waited for it at Winwick, so maybe the Earlestown connection is wiser.