Off we go!  A lightly loaded 156 took me from Huyton to Wigan.  I was interested to note mast bases for the forthcoming electrification have appeared along part of the route. 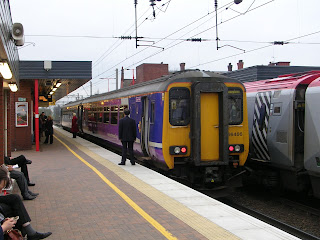 Ah, now this is more like it.  Although I often grumble about Pendolinos (I don't really fit into a standard class seat, especially one of those ones with no window.) I have to say first class with a fried breakfast and free wi-fi is a fine way to travel.  About 50% loaded in first, I would guess, and once the Warrington reservation was a no-show I moved into a forward facing widow seat to enjoy the ride.  My apologies to the gentleman who sat in the rear facing window seat at Warrington, and then swapped to the aisle a couple of minutes later when I swapped to the window.

Next, a quick hop via the Victoria (rammed) and Bakerloo (lightly loaded) lines, to Paddington.  West of England services are in a mess due to engineering works beyond Castle Cary, which allowed me to catch a very lightly loaded HST on a Paddington to Castle Cary service to take me to Westbury.  The first class at seat service was suspended on this truncated service (Can't say I blame them, there were only three people in my carriage.) so I had to go and collect my coffee and cake from the buffet.  After the chaos of Reading (When it's all settled I'll have to go and do the "new" underpass.) we trundled on in glorious sunshine calling at minor stations such as Bedwyn - Exit from coaches A, B, C and D only.

Why Westbury?  Well, according to a trawl through my records, I've never actually travelled the last half mile of this journey, from Westbury East Loop Jn to Westbury North Jn.  This is probably just an omission in my notes, but I'm doing it today just to be sure. 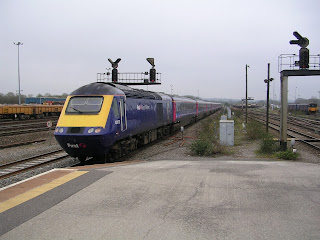 Here's my train from Paddington leaving Westbury after I alighted. I just managed to march to the front in time to get the number of the lead power car before it headed off. 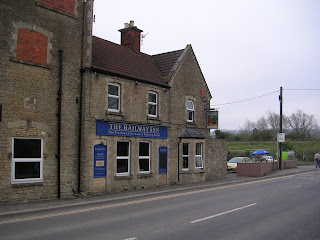 Just time for a swift pint of Wadworth 6X in the Railway Inn... 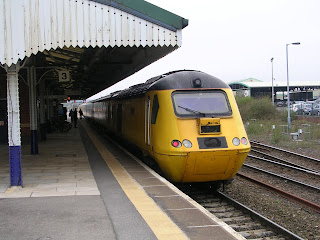 ... before returning to the station to find the "New Measurement Train", a short High Speed Train set full of test equipment and engineers.

And the next leg of the journey was in a hot and crowded 158 to Newport via Bristol. Leaving Westbury 5 minutes late left me with a bit of a worry as I had a five minute connection ahead, but fortunately a prompt reversal at Bristol meant we were 1 early into Newport. 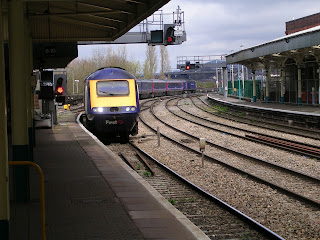 Now, a last bit of HST luxury as I head to Swansea.  This time, the trolley came round with my freebies as we trundled westwards under what was now a fairly heavy overcast, the sunshine having run out back at Westbury.

I must say, I'm beginning to understand why first class fares are so high.  Once again, I'm in a carriage with about three other people - Someone has to pay the cost of hauling all this fresh air up and down the line. 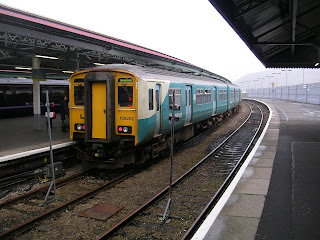 It was raining when I got to Swansea, (Does this increase or decrease the chances of me catching measles?) so straight on to a 150 for the last leg of today's journey.  Luxury no more, as we rattled up the hill out of Swansea, and on through the splendidly rugged coastal scenery.  Things get more and more rural the further west one goes, and by the time we'd reversed at Carmarthen and turned left at Whitland we were on a single line railway where the train has to stop to check the level crossings are clear before crossing the road. 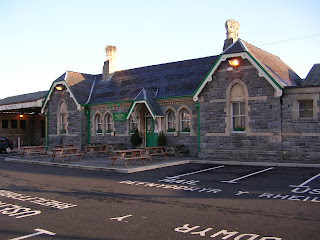 The end of the line is Pembroke Dock, a little one-platform station who's main attraction is the Good Beer Guide listed Station Inn, where I enjoyed a pint and an excellent liver and bacon dinner.